I recently started a small series of posts on PowerShell terminology.  In this post, I will discuss what I like to call “loosely integrated products”.  Briefly, I use this term when I talk about how different Microsoft server products implement their support for PowerShell.

These are example of Microsoft products that I consider to be loosely integrated:

In the above examples, the product team ships the product with a PowerShell snapin (except the IIS7 must be downloaded separately).

Hopefully the next version of Operations Manager (maybe in 2012) will provide more complete PowerShell support, which can mean a major rewriting of the user interface.

I’m not going to go into detail about IIS7 and SQL Server 2008, unless a comment is left asking me to discuss them in detail.

So the path to manage these applications is:

RoveIT has a product called Mobile Admin that you can read about HERE.

They are putting on a free webcast this coming April 29th at 11AM EDT.  You can register for the webcast HERE.

I’m looking forward to inviting RoveIT to my PowerShell user group possibly in June to talk about how they are using PowerShell in their products.

Unable to join the meeting? Follow these steps:
1.Copy this address and paste into your web browser:
https://www.livemeeting.com/cc/winserver_usergroup/join
2.Copy and paste the required information:
Meeting ID: 4FB8CN
Entry Code: 8^-\zqX

I just noticed that they have recently made the scripts from the book available for download.

I recently announced my tenth meeting of my virtual PowerShell user group HERE.  The original date was April 30th.  I’m changing this to May 7th.

I apologize for any inconveniences.

Unable to join the meeting? Follow these steps:
1.Copy this address and paste into your web browser:
https://www.livemeeting.com/cc/winserver_usergroup/join
2.Copy and paste the required information:
Meeting ID: 4FB8CN
Entry Code: 8^-\zqX

I recently started a series on PowerShell terminology HERE.  One thing I mentioned was Microsoft’s Common Engineering Criteria (CEC).

You can read through Microsoft’s official web site HERE.

From my understanding, CEC is a set of best practices that are to be implemented in all server-based products.  Now, this may be some kind of internal document, and I’ve never seen it, so this is my unofficial interpretation of things…

Microsoft added PowerShell as of their CEC 2009 standards.  Apparently, if a server product doesn’t meet all of the CEC guidelines, the particular product team must justify each and every deviance from this to some internal Microsoft group who likely oversees the compliance to the standards.

Based on the products that have recently come out from Microsoft, I don’t believe the standard outlines exactly how PowerShell should be implemented in products.  This is my conclusion based on seeing the differences with how newer products have varying levels of PowerShell support.

I’m going to blog about a few terms I like to use when I talk about how PowerShell is supported in different Microsoft server applications.

This is the first post in this small series, so I’m going to briefly discuss “PowerShell-enablers”:

Since Microsoft announced that PowerShell was now part of their Common Engineering Criteria since 2009, there are some products that officially released around the time of the announcement and also after.

There are examples of Microsoft products that don’t provide any PowerShell support per se:

Now, that being said, these products do support “PowerShell-enablers”.  To me, these are technologies like COM (Component Object Model) and WMI (Windows Management Instrumentation).

So the path to manage these applications is:

In the next post, I’ll talk about loosely integrated products. 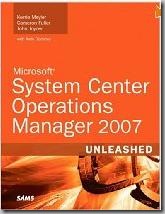 I just wanted to mention a book that I am writing for:  System Center Operations Manager 2007 by Kerrie Meyler, Cameron Fuller, John Joyner and Andy Dominey.

(The link and image are for the 1st edition.)

A publication date has not been set yet, to my knowledge.

I’ve contributed a chapter on using PoweShell where I cover the basics of what a OpsMgr user should know, show some basic examples of general Windows tasks in PowerShell, then show some practical examples of how to use PowerShell in OpsMgr to script and automate tasks.

I just wanted to mention a book that I contributed to last year:  SQL Server 2008 Management and Administration by Ross Mistry.

It was published this past January 2009.

I contributed a chapter on using PoweShell with SQL Server 2008 where I cover the new features provided in this release.  I also cover some of the basics a DBA should have a grasp of before using PowerShell.

If you visit my blog and have the book, please don’t hesitate to leave any comments!

The room size allows a maximum of 60 attendees.  As of about 2 weeks ago, the registration was at 53.

I’m looking forward to meeting IT people from the area.  I’ll also be trying to get in a few minutes to talk about starting up a IT Pro user group in the Moncton area.

The previous post HERE mentions a free online Microsoft event where I did a 60 minute session on PowerShell-related developer topics.

There is a link HERE to the Live Meeting recording of the event (the link should work).

Hopefully developers new to PowerShell will find the discussion interesting.